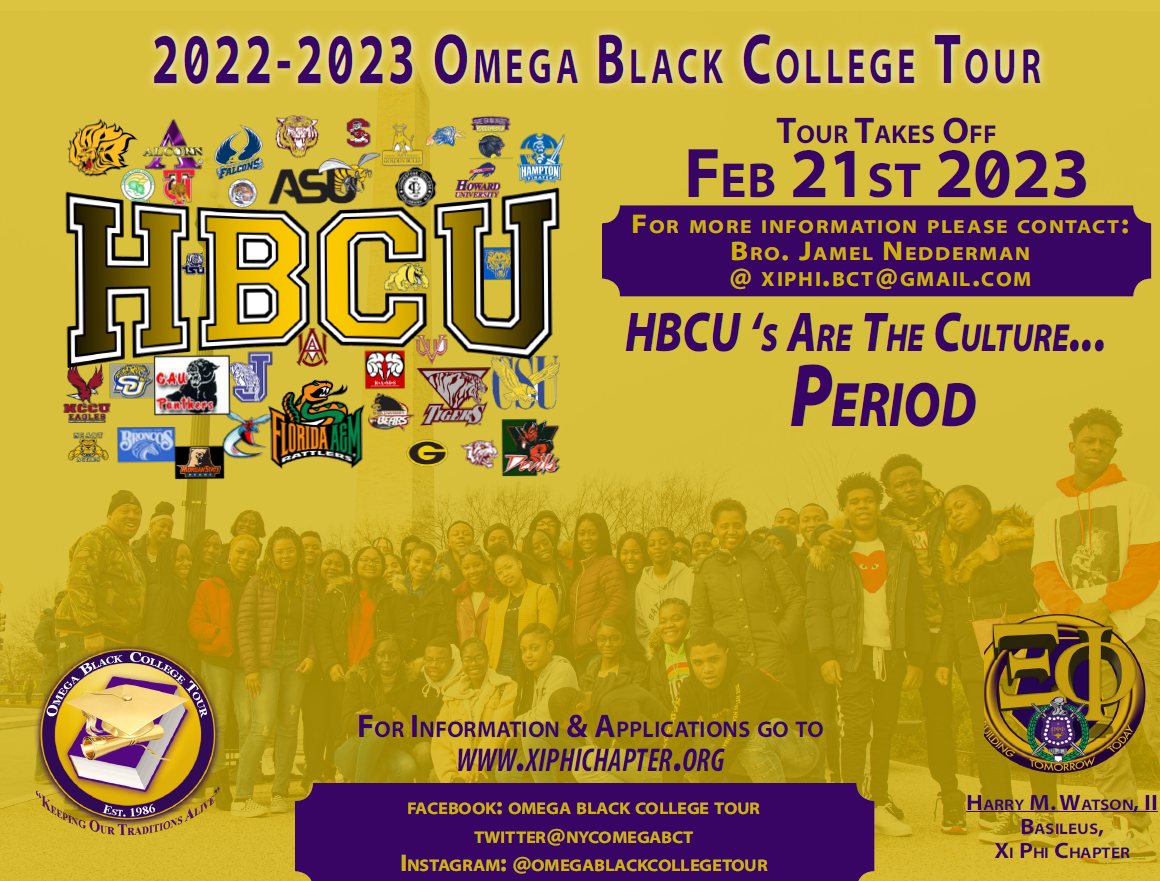 The tour is transitioning from the six-week virtual program that was sponsored in 2022, to an on campus program in 2023. The tour will include several of the nation’s top HBCUs including Morgan State, Bowie State, Virginia Union, Virginia State, Hampton University, Norfolk State, Delaware State and Howard University.

As with previous tours, the program seeks to promote the benefits of a college experience at an HBCU, while placing an emphasis on them being essential to helping scholars compete in the 21st Century’s knowledge-based society.

“It is hard to imagine a time when the need to produce students who can excel in STEM-related occupations has been greater,” said John L. Staton, Founder of OBCT. “To be career-ready in our knowledge-based society, student learning must go beyond mastery of core subjects and include 21st century knowledge and skills like critical thinking, communication, collaboration, and technology literacy.”

The Xi Phi Chapter, Omega Psi Phi Black College Tour was founded in 1986 by John L. Staton, a career educator and administrator who spent more than 35 years with the New York City Department of Education. John was initiated into the fraternity at Central State University in Wilberforce, Ohio in 1966. Since it was founded more than 1,500 students have been on the tour.

Staton wanted to dispel the myth of HBCUs being inferior institutions, so he created a platform to showcase the countless graduates who had become many of the world’s most recognized and accomplished persons in their fields. The platform would also introduce students to college life at an Historically Black College and University (HBCU).

He also believed that organizing a tour of these campuses would put the transformative power of a college education on full display, and help students dream beyond their current circumstances, while showing them a rigorous but supportive and nurturing environment where they could flourish.

“I’ve come to realize that the times I’m outside of my element is when I’ve experienced the most growth, so it’s really important to me to get students out of their comfort zone and expose them to a world far outside the bubble in which they live,” Staton said.

The program is at its best when students buy into the fact that their current circumstances aren’t an impediment to achieving their goals according to Staton. “We attempt to spark their intellectual curiosity and surround them with students from similar backgrounds who are on track to graduate during every campus we visit. On the last tour we reinforced the campus visits with a one-day trip to various memorials in Washington, D.C. so that they were bombarded by even more success stories about world renown African-Americans with the goal of searing into their young minds that success in whatever they choose to do is within their reach,” he concluded.

To learn more about the Omega Black College Tour and its diverse activities, contact
OBCT@xiphichapter.org.